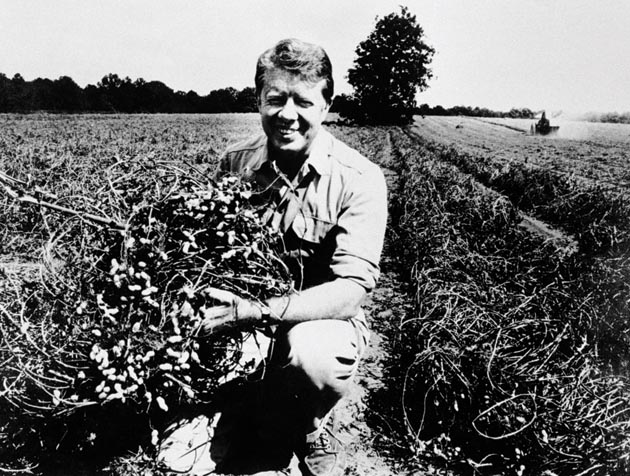 Did you know that before he became the 39th leader of the free world, Jimmy Carter owned and operated a peanut farm? Not only that, the Carter family also operated a peanut warehouse and a store outside the small town of Plains, Georgia throughout the Great Depression.

The story goes that when Jimmy was a teenager, his father, Earl, gave him an acre of farmland where he began to grow, package, and sell peanuts. When Earl died, Jimmy and his wife and three sons moved into public housing, and as a matter of fact Carter is the only U.S. president to have lived in housing subsidized for the poor. Knowledgeable in scientific and technological subjects, and with the groundwork laid out by George Washington Carver, Jimmy set out to expand the family’s peanut-growing business.

Though they barely broke even the first year, the Carters grew the business and became quite successful. Peanuts would eventually help to launch Jimmy into politics. He was always in favor of racial tolerance and integration, and at one point the local White Citizens’ Council boycotted his peanut warehouse. This solidified his views that would eventually champion the Civil Rights movement of the 1960’s. He soon thereafter ran for state senator.

In 1981, President Carter returned to his Georgia peanut farm where he continued to live an active life and lead beneficial projects such as Habitat for Humanity. Today he is still doing well at age 90! Who needs politics when you’ve got peanuts?